National Geographic sent two engineers over-no luck. The Aussie yacht sent a mechanic over-no luck. Jim "the wrench" Norcross had suggestions we are currently working on (the last was: develop your upper body so you can do a lot of rowing). But the engine is sick and it looks like we will sail home. I only ask for SW winds @ 25 and no more than a 10 foot swell.
I don't know if this means I'll make my February 17 flight or not because it all depends on the wind. And that, my friends, is why they call it adventure.

So we met the guy with all the stickers on his boat. He made a lot of "you have probably heard of me and the time I…" statements. We all listened politely. He told more stories where he was the hero. Then he said his buddy's boat was following a group of killer whales for a week or so and Jerome, in his hilarious understated way asked, "And what does he do at night?" The guy exited into the engine room to offer advice. Jerome meanwhile launched into a story that blew our minds. 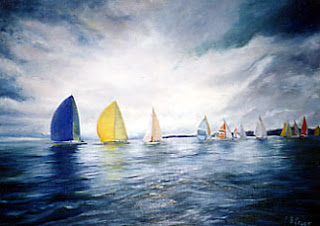 He was in the Hobart Race in the 70's when the yacht, Ginkgo, was rammed by a killer whale. As captain, Jerome rushed below to find water gushing in through a three-foot hole. Stuffing sails in the gap, Jerome and crew quickly inflated the life raft and as the bow sunk clambered aboard. He vividly remembers the bull whale stationed between the Ginkgo's hull and the life raft but as the Ginkgo sank the whales followed it and were not seen again. The six men in the small raft were 900 miles from anywhere and far from any shipping lanes. They had 10 liters of water and some canned goods.

After a couple hours one of the crew became distraught, saying he was seeing things. It was the quickest rescue in history Jerome said. He looked out, a boat was sailing past, he shot off two flares and Viola! They were on their way to New York. 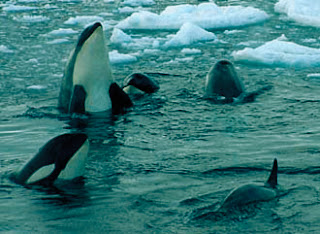 This story bothers me on a few levels. One, I didn't realize killer whales did that. But Jerome assures me he knows of several instances where boats were rammed. I may have to rethink my actions around them in the Southern Ocean. They are all transients. No happy little resident pods chatting it up here, like in Prince William Sound. They act quite differently and from our first sighting of them I have felt a bit uneasy. Predators are smart and killer whales the smartest of all. I will bear this in mind next time I jump in my kayak to cavort with orcas.