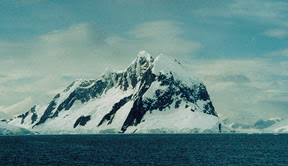 Woke up to a commotion at 4 am. We were dragging the anchor –70 meters of chain hanging straight down in deep water. We are now firmly moored at Baie de la Salpetriere at Booth Island. I woke up at 9. The wind was screaming. I made coffee, climbed up to the wheelhouse and talk about visual shock. There was the National Geoship Endeavor parked 100 feet away and 5 floors up.

The rocks were covered with folks in red coats with ski poles tramping around. I was ready to tramp too so Dee and I went to shore and in the first 5 minutes I met 4 Alaskans working for NG as tour naturalists/experts. 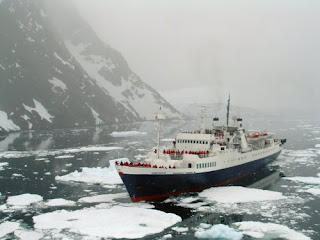 Kim and Melanie Heacox were herding folks out of black zodiacs and talking about Norman. I couldn't believe it. Alaskans get around.

In Dr. Jean Baptiste Charcot, a famous French explorer, spent two winters here and mapped most of the peninsula. Port Charcot at Charcot Bay is on the other side and at the top of the highest point the men built a cairn of stones. At the southern end of the Antarctic Peninsula Charcot Island and famous Marguerite Bay were named for Charcot and his wife. Born in 1867, Charcot cruised all over the world and commanded scientific expeditions in the Arctic and Antarctic. He was an expert in polar regions who began his sailing career in 1892. He died at 69, when his boat sank in a storm in 1936 on an Arctic expedition out of Iceland. 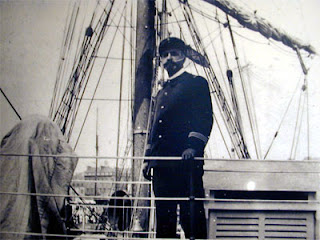 All but one of his boats had the same name: "Pourquoi pas? "Which asks, "Why not?"

French writer Jules Verne inspired Charcot. Charcot inspired Jerome. Jerome must have inspired Leiv because last night he cut Jerome's cast off with a grinder. He did a great job but I think it was too soon. Jerome says he can feel the pins when he puts weight on the leg and judging from the way he climbs the stairs with his crutches he will soon break the other leg. Katee cut the end of her finger off so she now looks like the gal in Even Cowgirls Sing the Blues. We are going down hill...