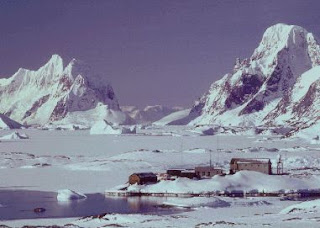 Leiv and Jerome have a handle on the engine. It is the screen in the turbo, which appears to be fouled and is blocking air and thus power. Maybe.

We limped in and are moored at the Ukrainian Base, Vernadsky, for repairs. It was a grand entrance in spitting snow. We turned into the protected cove to find a pair of very fancy sailing yachts taking up the entire space. They have sponsor names painted on the sides like race cars and the people who came out on deck when we drove on to the rocks had matching red and black outfits. So we are high centered and Jerome is limping around with two crutches, grease from the engine room on his hands and face, eyes red rimmed with fatigue gesturing wildly with his hands trying to give orders to a hapless crew. Luckily Leiv makes up for the other five of us. He and Steve are already in the zodiac and moving with a line to the cliffs so we can be winched off the rocks and moored properly. He literally runs up and down the rock face with the cable and lines, two outraged skua attacking his head, and now we have a crowd watching as our poor engine belches noxious black fumes and pollutes the Ukraine.

Usually you need an invitation to visit but I bet I can get in based on the power of gossip alone. They have a bar here from when it was the British base. I haven't seen it yet but I may kayak over later and check it out. Apparently these guys are friendly to stranded sailors and tourists. They even sell Ukraine knick-knacks.

There always has to be some guy who gets his rocks off by telling a woman what to do even tho she does it better and faster than he. These are the guys who use words like babe and lady and woman instead of your name. And because they are NOT teasing it's demeaning, it makes you feel invisible, and angry because you are hurt but if you call them on it you can't take a joke, you're too sensitive blah blah blah. But 23 days is a long time. Norman said it best. Manners are important. 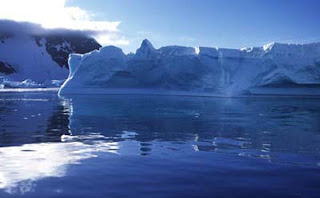 So here's the scene: Leiv is driving, Katee is massaging his neck, Dee is working on Katee's back,Yva is rubbing Dee's shoulders, Steve is plummeling Yva and Jerome walks in. His eyes wide he grabs a pillow and begins to knead it laughing madly.

We saw a skeleton graveyard of icebergs all blue and shiny in the sun today. The wind had pushed them to shore in a jumble. It was exquisite.