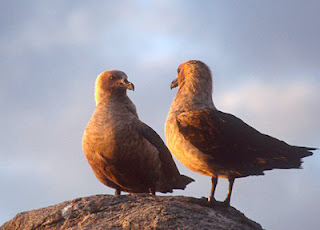 Just another day in paradise. We are mooring in tiny coves probably only Jerome knows. Giant icebergs pile up in the outside swell while we are ice free and calm in a cove filled with other insiders-Crabeater, Weddell and fur seals, Adelie penguins, cormorants and skuas. Leiv dropped John, Russ and Steve on the near island then turned the zodiac over to me so he and Jerome could work on our suddenly laboring black carbon belching AMERICAN Caterpillar diesel engine. They have just about exhausted (it's a pun folks) their manuals and ideas so Dion 's relaying info from a mechanic back in Stanley. I am emailing my ace diesel dude, Jimmy "the wrench" Norcross, so he can stand by with some brilliant solution that will dazzle and further rile the French.

At any rate I took Yva, who has been boat bound the whole trip with a bum knee, up to photograph skuas. If you don't know skuas think pit-bull with wings. They are scavengers and have these giant gnarly beaks they use to open up a dead seal then they stick their whole head inside to feed. Yew. 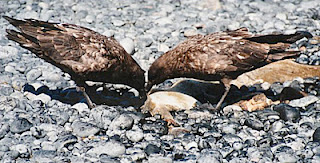 I tied up and Yva and I began exploring and walked right into skua-ville. These are not passive birds. They dived bombed us with a vengeance. So I used my climbing stick and attached my hat to it and held it up. It worked for Butch Cassidy and the Sundance kid and it worked for me. Yva started shooting at this little lake and I walked up into a slough and there, thawing out of old ice, was a whale. A big whale. Vertebra like platters, ribs a foot wide and 16 feet long up in a rocky slough 20 feet above the sea. A mystery. And the bones. Old: orange and green crusted, some just emerging from the ice. When we went back to the boat I cornered Jerome. I knew he had sent me to the little lake hoping I would find the whale. These French are so cryptic. So what happened, I asked. How old was he and how did he get there? Answer: Glacial rebound. Dang. I should've thought of that.

The ice melts, the weight and pressure are released and the land once submerged now expands-in this case-out of the sea taking the dead whale along for the ride. 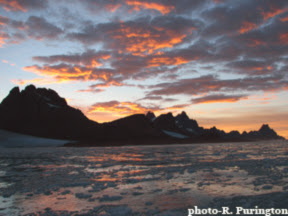 I took Katee to see it later. She told me about South Georgia. The whaling station and the bone piles from thousands of slaughtered whales. The skeletons changed the landscape around the bay-from a flat place to one with hills-hills made of bones, now covered with dirt and grass.