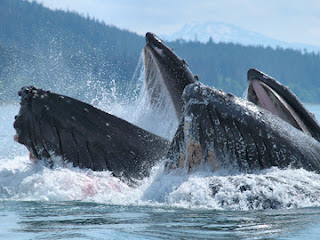 We stayed up late shooting two humpbacks feeding in the ice. They used the boat and each other to herd the krill, taking turns, One herds by angling his body close by the other but a bit in front then quickly turns toward his emerging partner whose gaping mouth is suddenly filled with frightened red shrimp. We were 20 minutes from the night mooring but we spent five hours on the whales, fascinated with their huge pink accordion like throats, the changes in light, the water cascading off their flukes.

So we had dinner at 10 pm. Steve and John were still up editing pictures at 4:30 am.

Jerome and Leiv spent last night in the engine room. They would come out for coffee, greasy streaks on face and hands. Not much progress on the engine. Not enough power and it is still puking black smoke with chunks in it. We also appear to have sprung an oil leak which affects the autopilot. They are eager to fix this as they have to stand watch 24/7 on the wheel without it. 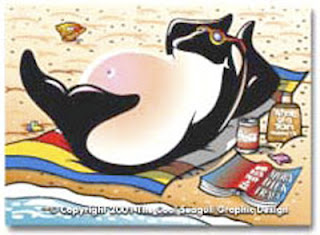 And we are low on water.
Bummer since nobody has taken a shower in a week and we have a week to go. My hair is stuck in big chunks from pulling my hat off and on. I tried to braid it like I did when I was running dogs but it is too short. Oh yeah. And I am getting fat. I usually run 2 or 3 miles 5 days a week, lift weights, eat reasonably etc. Now I am eating 3 meals, sitting around and writing and reading and taking pictures. Kayaking when I can, doing some push-ups, crunches. But…I'm getting fat.