A few years back a group of rich guys-oil barons, miners-your basic exploiter- "visionary types"-decided the time was probably ripe to rape Antarctica -they were all lined up and ready to drill when suddenly this French dude named Cousteau and his buddies in Australia and New Zealand started a ruckus. 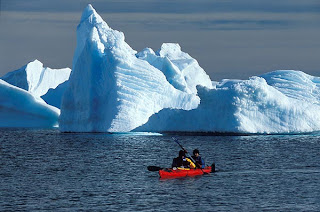 Now there is a 50 year moratorium on Antarctic exploration (the Wellington Convention) but planes south are full of oil guys headed to the Falklands (For examples of pillage-for-profit read about the group of rich Americans who took over Hawaii for sugar and pineapple and ultimately, real estate) (for more recent examples see Iraq/oil) So for the moment the Big Guys are barred and, interestingly enough, the most negative impact the area faces is from the scientists studying it and the immense support teams they require. 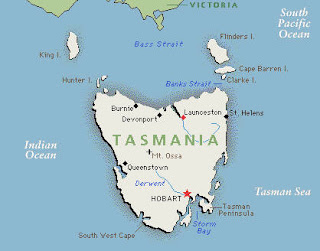 Put the kayaks in the water yesterday. Steve and I took a trip around the bay. Getting low on the water is always better I think. You can hear crashing bergs and every splash a penguin or seal makes. Paddling in all this ice is a trip. I became so disoriented with all the movement at one point I almost got squished by pack ice. The bergs move in currents, the pack moves, the rocks don't and it can all get confusing when you are at water level. I became more aware quickly. Turns out Leiv is quite the kayaker and humble about it. He did a trip around the Falkland Islands-I mentioned that earlier. He also kayaked around South Georgia AND around Tasmania. Wow. 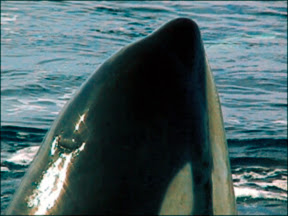 This morning we spotted our first killer whales. Leiv, Steve, John and I boogied after them and what a show! First three, then eight, then twelve-all transients and looking like gangbangers. Up on floes to check for seals, circling penguins, spy hopping, splitting up then reuniting in a rush. We stuck with them-it is such a thrill when they check you out. They are an odd greenish yellow color unlike the pristine white orcas in Alaska and they have a lot of wear and tear: scarring and mangled dorsals and tails. There is plenty of chow here. One technique that works well for them is to throw themselves up on a floe and tip it. Either the seal falls off or is washed off by the resulting wave. Two dominant females approached us several times for an up close look-maybe two feet then dove under the zodiac. Whales rock.